In a recent meeting with our rep from Fleischer Jacobs, we got to talking about all of the grown up stuff you never want to think about: Life insurance, trusts, wills. I tuned in and out, as much of it was a bit over my head. It was when I heard her saying, "...so if the two of you were to die in a plane crash, then Hudson would..." that I piped up.

"We don't have to worry about that," I said. "We always fly together. The three of us." Her response was quick and direct: "You. Must. Do. It. You have got to make time for yourselves. Just the two of you." It was then—when our financial advisor turned marriage counselor / life couch—that it struck me how badly in need of alone time we are.

Aside from the time he's spent at school (or with his nanny in DC), I can count on one hand the total number of hours we've been away from Hudson since the day he was born. It's not that we're overbearing or paranoid first-time parents. Life has just gotten away from us. Not to mention that Hudson's pretty fun to hang out with.

Ever since that meeting, I've been obsessing over what to do about our situation. Take tonight as an example. We were feeling antsy and wanted to get out of the house for a while. We decided eating out would be fun, but our selection of restaurant was more a process of elimination than anything else. Where's the closest place, that serves tasty beverages, that isn't too crowded... AND will be OK with a toddler taking over the joint. The bakery. Again. (No offense to the bakery, of course, it's just that if there's one thing Vermont has, it's restaurants to choose from.)

So we went. Oddly for a Saturday night, we were the only ones there. That was just fine with Hudson. He ran from table to table. He played with all of the utensils. He squished the bread. He smeared his hands all over the windows, glass doors, and bakery case. He rearranged the booster seats, sliding them all over the floor. He climbed up the high chair, pulled down the Melissa & Doug Latches board and threw that around. And that was all before the food came. They were out of the Woodchuck Amber , which totally bummed me out, and by the time we were finished eating we were all exhausted.

By 8:30, Hudson and Logan were both in bed and I was on the couch reading the copy of Kids VT magazine I picked up on our way out of the bakery. Right smack in the middle of it, clearly written to taunt me, was an article about finding the perfect babysitter. Sigh.

My problem is two-fold: I don't like the idea of asking friends for help (they have their own lives, their own kids, there own issues to deal with without having to take on my mine) and the idea of leaving Hudson with someone we don't know doesn't sit well with me. So what's a girl to do? 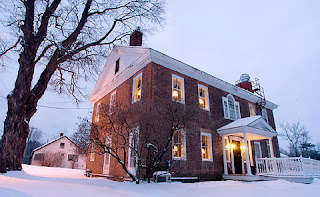 I have faith that someday we'll figure it out. I just hope it'll be sooner rather than later because I'm not sure how much longer the Kitchen Table Bistro will honor the gift certificate we got as a wedding gift.

Two and a half years ago.