When I was three years old, I took my first ballet class. One of my mother's favorite stories about me dates back to a recital later that year...

There I was, up on stage with 10 other girls performing our baby plies and pirouettes. As legend has it, my headpiece flew off and ... this is the part where my mom always pauses for dramatic effect ... "You kept right on dancing without missing a beat. AT THREE!" my mom will say. "All the other girls would've stopped to pick theirs up. They would've cried. But you, YOU!, were a total professional." A baby Baryshnikov. I was headed for stardom!

Flash forward 35 years and I, along with millions of others around the globe, have committed this new year to try, like Stella, to get my groove (read: old , smaller, pants size) back. So what do I do? I take that sentiment literally, and throw myself blindly into my first ever Zumba class.

At the strike of 6, the empty Y gymnasium buzzing with fluorescent tube lights exploded into an all-out salsa-cum-twerking rave-fiesta. Suddenly, I was one of a sea of 50 women (and two men) thinking, "How hard could this be??" Except I quickly learned that all 51 of them had done this before and it was hard as hell.

'But I was a classically trained ballerina!' I thought, already lost after two beats. I understood then that I'd probably peaked before I hit puberty and that all those years of lessons afterward would not save me now.

'BUT WAIT,' I thought to myself, struggling to keep up and reaching into the depths of my being for salvation. 'My name is MARIA. I'm a latina* woman, for crying out loud! These moves should flow through me like the blood currently rushing to my head and making me want to pass out.'

There was no doubt about it. I wasn't a dancer anymore. I wasn't even coordinated. I was Baby. Except, dammit, I totally deserved to be in the corner. My only saving grace was the young girl that was one row up, two spots over from me. Every time I looked over at her, she was doing the absolute polar opposite thing everyone else was doing (and I was attempting to do.) 'At least, I'm not HER', I kept thinking. She had absolutely no rhythm. But in her own spastic, nerdy (would totally have been played by Joan Cusack complete with head gear in the 1980s version of this moment) way, she was bursting with soul. I was just busting a gut.

Fifty-nine minutes in, I thought maybe, just maybe, I was finally starting to get it. The kick-ball-changes from my years of Tap came flooding back, as did the few bits of Irish step I'd picked up from Erin, Susie, and Abby in grade school. 'I'M DOING IT!' I thought, 'I'M DOING IT!' But it was too late. The last song abruptly ended, the lights went back up, and everyone scattered like roaches. Son of a bitch.

Still reeling from those last precious 60 seconds of glory, I stumbled out into the -5 degree night in hopes of making it home for my bedtime-story duties. As I approached my car, I slipped on a 2-inch sheet of ice like no one has ever slipped before. Suddenly, I was three again, and it was not onto my ass that I found myself falling, but into the arms of Patrick Swayze, where I nailed the most epic Swan Lift you've ever seen. My mom, like Kelly Bishop circa 1987, would have been so proud. I was a star. 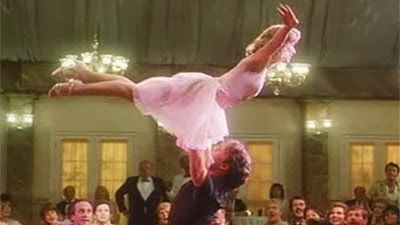 *If you didn't read this with a spanish accent like those crazy news anchors do on TV, please go back and read it again with the accent. The line is WAY better that way.
Posted by Maria at 11:25 PM