WELCOME TO MY WORLD

In a meeting today my co-worker asked, "So wait, am I the d-bag in this situation?" It was then I realized that my mastery of non-sequiturs is still strong, and that maybe, just maybe, normal people don't drop references to last night's episode of (fill in favorite TV show name here) like it's real life. I guess I watch a lot of TV. But I truly believe that those of you who don't are really missing out. 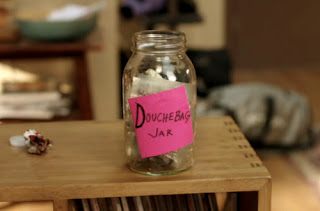 Take, for instance, the woman I was meeting with: Grace. It would be totally acceptable if she just hadn't gotten around to watching "The Story of the 50"—by far the funniest episode of the show New Girl yet. After all, I only saw it on Tuesday and it aired on January 17. (I watch everything OnDemand during naps, or on my iPad once Hudson turns in for the night.) But she didn't even know Zooey Deschanel had her own show!  Grace practically is Jess Day (except with shorter hair and no bangs) and she doesn't even know she exists. Tragic! 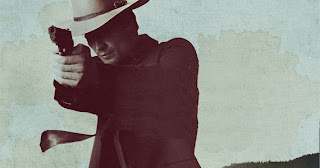 Alison informed me today that she doesn't have cable. That would be fine if her doppelganger wasn't starring in the totally awesome Fx show Justified. (Have you seen that Stetson?!) Last night we finally got around to watching the premier of Season 3. Ava Crowder was so badass in this episode that I wondered why she and I don't get beers together more often. Then I remembered that Alison and Ava aren't actually the same person. And that's fine with me, since the farm down the road is way more convenient than the one down in Harlan County. I just hope I don't call her fiance Boyd the first time I meet him. 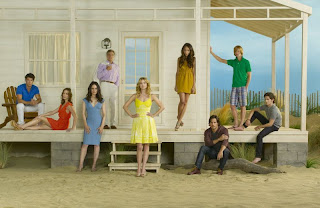 In college, my friend Sarah's friend told me that I was a dead ringer for Madeiline Stowe. At the time, it didn't mean much. Now? I'M FAMOUS! Sure, I'd rather be Emily Thorne—or Amanda Clarke, if you will—but I'll take my sweet Revenge any which way I can. Let's not forget: Hudson's middle name is Hampton. It's like it was all meant to be!

So, OK, maybe the office isn't the best place to slip into my fantasy world, especially if people don't recognize it when we get there. Or maybe they just need to come over to watch a marathon of all of my favorites on our super fabulous 40" flat screen TV.